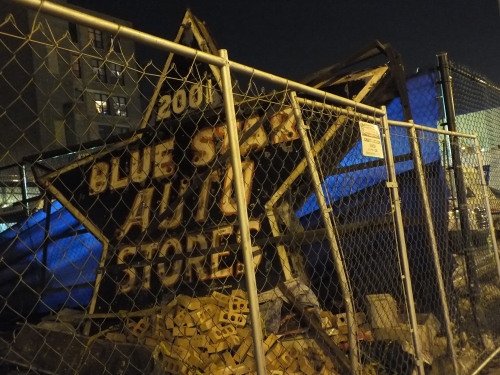 I have an unintentional theme going.

Blue Star Auto Stores.  The building is under construction, and the sign has been discarded in the lot next door.  I sure hope they are saving it.

I was not planning on having a Hot Dog for dinner, but when I saw that O’Malley’s was still open it certainly seemed like a good idea.

They close down for the season next weekend, so you still have time for one more Char-dog or Steak Sandwich. 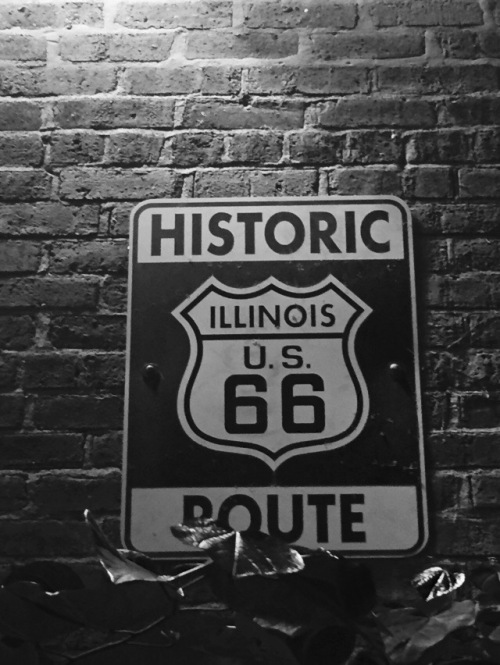 We stopped in for a Hamm’s.

After a series of illnesses and sinus infections, we finally got back on the taco trek.  Saturday brought us the sale of my golf clubs and an extra $50 in our pocket, so we headed to the city and jumped on the El.

We are CTA people, especially the El.  The less we drive and sit in Chicago traffic, the happier we are.  So we took the red line to the blue line and got off at Division, deciding we could easily cover the two mile trek to our intended stop: Bullhead Cantina.

As we walk down the street, I spot sign after sign advertising drink and food specials for ridiculous prices.  $3 mimosas seem to be very popular (I can’t believe I didn’t already know about this).  One bar advertised a $15 bottle of champagne!  Where have I been while all of this inexpensive eating and drinking was happening?  I am the proverbial cheap date – except in large quantities.

As we waited for the light to change, I noticed Takito, kitty-corner, across the street.  “I think this one is on the list.  We might finally do the daily double.  I think it’s the crispy fish taco.”  Tom, being the gentleman that he is, said he would follow me anywhere.  I check the Time Out list and success! We are here, it is the crispy fish taco, and because it is early, there is plenty of room inside.

The menu looks amazing.  I don’t get past the first two items: the Alaskan King Crab taco and the Crispy Fish Taco. I’m actually disappointed that I have to order the crispy fish taco because there is a merguez lamb taco shouting my name.  Unlike shrimp, I like fish, but fish tacos are not my favorite.  It tends to by mushy and bland, at least the ones that I have had.

After some debate over the drink menu (margarita for me, Negro Modelo for him), we place our order for an Alaskan King Crab plate and a Crispy Fish plate.  Tacos come three or four to a plate at Takito – no singles!  In the interest of keeping some room left for Bullhead Cantina, we stop there.

Instead of the traditional chips and salsa, they bring a house-made version of cinnamon crisps – fried tortillas with cinnamon and sugar.  They are yummy, but better served as a dessert, which would have made them stand out a little more.

While we wait, Tom takes his pictures, I respond to a text from a friend who had seen me walking down the street and I take in my surroundings (and my margarita.)  The shelf of canisters catches my eye.  They are various toppings for the tacos in clear plastic containers and one of them is very clearly labeled “Cheetos.”  Hmmm, I bet this place is going to be an interesting product of some guy who likes to smoke weed and get the munchies.

Aaaah, the plate of tacos is set in front of us, and the one is noticeably beautiful, while the other is its plainer, blander sister.  The crispy fish taco is placed on a bed of hibiscus tortillas and you can’t help but want to eat it.  The Alaskan King crab taco, upon which all my hopes were placed was beige.  Maybe not really beige, but certainly lackluster in comparison to its vibrant and attractive neighbor.

We start with the fish taco, because it’s the one on the list and holy cowbells!  Saints alive!  Takito has just reversed my opinion of fish tacos.  The word “crispy” has never been so mind-blowing.  I actually feel my eyes widen in surprise an delight.

And then we move on to the “other” taco.  And that’s exactly what it is.  Crab should never taste “fishy” and this one does.  That’s the only taste I taste.   The freeze dried corn acts like a member of a group project: it does nothing.  The rest of it is just bland mush.  My disappointment is washed away with my final sip of $10 margarita.  “If the Alaskan King Crab taco is this disappointing, I don’t even want to bother coming back for the merguez lamb.”  Tom nods in crispy fish agreement.  Again, a first: the rest of the crab tacos are ignored and we start to do that polite thing where we offer the remaining crispy fish taco to the other person when we secretly want it for ourselves.  I (sarcastically) remind Tom that I am a female, and therefore, dainty.  I take a bite and give him the rest.  He’s really awesome, he deserves the good taco.  We paid the $50 bill and left.  He took more pics, and we continued our walk.

This stretch of Division is magical.  For my darling Sweetheart, who loves his camera almost as much as he loves me, we can’t stand help but gaze agog at the interesting, unique, retro signs.  He loves photographing neon signs, I love dive bars.  Division Street has put the two together for us.  We fight every urge we have an walk the two miles to the next place, excitedly anticipating the taco/whiskey bar.

Bullhead Cantina…the type of place that people use for day drinking.  It’s fairly dark inside, TVs, regulars eating and drinking.  It’s like the Lotus bar in the movie “The Lightning Thief,” time seems to pass in a series of minutes, when it’s actually hours and days.

Time Out Chicago prescribes the Sweet Potato taco.  When we question the bartender/bad waiter, he recommends the Carnitas or the Southern Fried Chicken Taco.  We decide on two sweet potato tacos and a Schlitz tall boy and a Steigl to start.  We eventually add on one each of the recommended tacos and ask the bartender to please deliver Tom’s Schlitz tall boy.  Strike one.  How does one order two beers and only get 50% of the order?  As a matter of fact, that counts as two strikes.  That’s unconscionable.

As I come back to the table, I quote Mrs. Mia Wallace, “Don’t you just love it when you come back from the bathroom and find your food waiting for you?” And we dig in….

There’s really no point to this taco.  None whatsoever.  I told him that I suspected that either the author of this article has a friend with the restaurant or he got wasted during riot fest and thought this was a good taco.  It’s not.  It’s not bad, it’s just not anything. 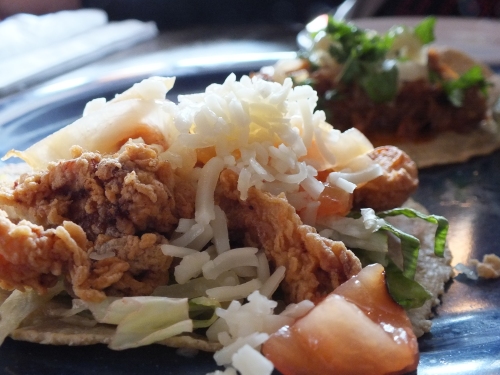 This time I just went to the bar and asked for it.  There was no light of recognition that maybe he had forgotten something.

“In a town like Chicago, there’s no room for bad restaurants.”  – Me

It’s something I’ve said to my husband several times.  We have too many good restaurants to allow a bad one to survive.

After getting not great tacos, after Tom not getting his beer twice, the bartender/bad waiter gave us someone else’s (more expensive) bill.  Game over.

We corrected the issue, walked down the street and spent our time at the Innjoy. This sign was no lie.  Free beer, free whiskey, free drinks, good wings, friendly crowd.  I can’t imagine who wouldn’t “innjoy” this place!

We had one of our city adventures today, and we discovered a fun new drinking establishment.

I highly recommend the InnJoy.

Within walking distance from the United Center. I know this because I walked it today.

La Luce Italian Restaurant on lake street, right next to the Brown Line Tracks. The trains just add to the ambiance.

The Bridgeport Restaurant located on the corner of 35th Street and Halsted.

A great old neon sign that looks even better in Black and White.

Problems on the expressway tonight, so I had to take the long way home. Past Petey’s Bungalow. I have never been inside, but I understand they have some fine food. 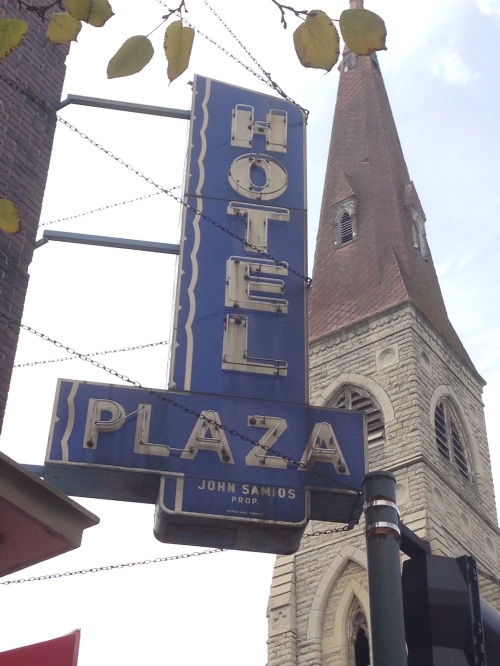 Had to take a trip down to Joliet today. Found this cool looking sign, and some of the best tacos I have ever had.

The Blue Taco in Joliet. Well worth the trip.