Being Liberal Does Not Make Me Un-American

There are groups that use terms like “Freedom” or “Patriot” to portray a notion that their ideas and opinions or more American than others.  They self proclaim that they are the true Americans, and that those who do not think the way they do are somehow Un-American.

On a bad day I have been called a Communist or a trader or things much worse.

Being liberal does not make me un-American.  I enjoy baseball, hot dogs, and apple pie.  And although I do not drive a Chevrolet, I do drive an American made automobile.  Ironically, I drive a Jeep Patriot.  My wife and I both drive them.

My stance on certain hot political topics are certainly more to the left than many of these self proclaimed patriots, but these viewpoints do not make me some sort of enemy.  The idea that only people with a certain point of view can be considered true American is the opposite of what this great country was founded to protect.

Our political landscape continues to get more divisive, and we have created an all or nothing environment where differences of opinions are no longer tolerated. Just like the vanishing middle class, a middle ground in all matters of policy no longer exist.  Those who do not conform to the ideas of either side are considered evil or depraved.  And it is this take it or leave it mentality that has created a world where we can no longer have a civil conversation without name calling or finger pointing.  It has created our current election cycle.  It has created intolerance and prejudice.

There was once a time when we welcomed contradictory views.  We had conversations and debates, but in the end we also had mutual respect.

Being a liberal does not make me un-American.  Like many other Americans, both liberal and conservative, I enjoyed a cookout and fireworks while celebrating our Independence Day.  An American Flag flew outside our home this weekend.  A flag that I am very proud to display and honor.  A flag that stands as a symbol for all Americans.  Not just those who claim to be patriots.

Happy 4th of July to all.

It’s Not What You Say

We all remember that from our moms, right?

It’s not what you say, but how you say it.  It may be true to some extent, but as the divide between the left and the right seemingly gets wider, it is also about what you say.

Before I got sidetracked by the whole Duck Dynasty fiasco, I had started writing about how a seemingly unimportant topic can morph into a hate fest.  How our opinions can no longer be discussed in a civil manner, and hatred has replaced understanding.  It is almost impossible to respectfully disagree with someone without being branded as “the enemy.”

Where has common sense gone?

What started me down this path of thinking was a Facebook post.  It was about this picture of our President. 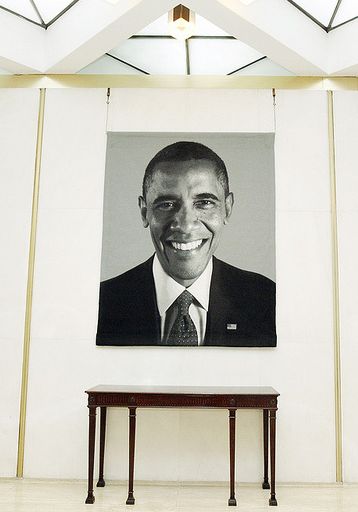 To be honest, I thought the story was stupid.  Somehow it was trying to state that the photo was proof of Obama’s communist intentions.  I didn’t get it, but if you would like to read the entire short article, you can find it here:

But it wasn’t the story that really got me thinking, it was the comments that followed the story.  Although the section right above the comments stated that the website had “no tolerance for comments containing violence, racism, vulgarity, profanity, all caps, or discourteous behavior,” right below that the first comment contained almost all of those things, minus the all caps.

Arrogant Narcisstist Homosexual Penis Gobbling Muslim Pig is what Obama truly is! I truly wish he would be giving a speech on National TV and his head explode in a red spray of hair, teeth, and eyeballs! That would be a true Blessing upon our Nation! In fact, I would even dance in the street like a pig muslim on 9/11, while singing “The Wicked Witch of the East is Dead”!

I did not edit this.  That is exactly how it appears on the site.

Let’s jump forward to that whole freedom of speech thing we have been hearing so much about over the past two days.  Is this protected speech? I guess,  but it could also be taken as a threat against the President.  Which by the way is a federal offence.  Even worse than the comment itself, twenty-six people “liked” the comment.

But this was not an isolated offense.  From the same comment section:

I would love to have one so I can take it to the range also. I used saddam husein pic. at the range and filled his face with 15 holes from a 9mm two months ago and it gave me such a rush. I know how to shoot well.

Do you see a pattern starting here?

There were plenty of comparisons to dictators past and present, but there were also a number of comments like this:

All this hatred and intolerance from a dumb story about an over-sized picture hanging in an embassy in London.  Where does this come from?

And that brings us back to our old friend Phil Robertson.  Yes Phil, you do have the right to say what you like and to express your opinion.  And so do you billwhit1357, 094870, MoDeVille and vietnamvet1971.  But it also gives me the right to call you what you really are:

I have a number of friends that have opinions that are different than my own.  Hell, I have members of my own family that are politically opposite from myself.  Yet somehow, we all manage to get along just fine.  We can have conversations and exchange ideas, and no one has to resort to name calling or blowing someones head off.

Maybe it time we all took one more piece of advise from mom.

If you don’t have anything nice to say, don’t say anything at all.

Why do you hate me?

Does my kind of love offend you?

Sure, my food choice is different from most.  Some would even say it is depraved or unnatural.  But all I am looking for is to be treated as an equal in the fast food world.  I just want my love of a frozen pork patty sandwich to be looked upon as equal to that of any frozen beef product sandwich.  In reality, is my frozen pork really any different from all those frozen hamburgers?  I understand that there are those who will oppose my choice in fast food love based on religious convictions, but I am not asking them to eat the sandwich.  I just want them to recognize that I have the same rights as they do to enjoy the sandwich I love, in the manner in which I love.

In what way I’m I hurting you?

My sandwich does not, in any way, diminish the purity or quality of your sandwich.  I am not looking to eliminate your sandwich because I believe my sandwich is somehow superior.  In fact, the addition of my sandwich will actually help boost sales in the market place, adding much needed revenue to our still slumping economy.

Isn’t it really about just treating all people the same?

Years from now, I envision a world were we will look back on this little chapter in history, and feel ashamed that we treated those who enjoyed a processed pork patty sandwich covered in a tangy BBQ sauce with such disdain.  Posting naked pictures of the frozen patty all over the internet for everyone to gawk at, shunning it as a disgusting and disturbing thing.  Making people feel that they are somehow immoral or perverted because their tainted love of this type of sandwich constitutes some sort of deviant behavior.