The following is from the editorial page of this morning Chicago Sun-Times.  Read it first.  I will comment later.

What is wrong with these fans?

I haven’t been to a Cubs vs. Sox game at U.S. Cellular Field in several years. Here’s why: I brought my young, grade-school daughters to several games. We had seats a couple rows in back of the visitors’ dugout. Every game we attended was just terrible.

We all wore Cubs shirts. The Sox fans spent almost the entire game facing us, not the field. They used disgusting language. They were obnoxious, abusive, unfriendly, vulgar and drunk.

At first, I thought, it can’t always be like this, just a bad crowd. We went the next year — another bad crowd. We tried again on a Sunday — better but not good.

The last game I attended, a Sox fan reached into my car and grabbed a small sign from my daughter’s hands. I decided, that’s it, I am not going back.

I have attended games in St Louis, Milwaukee and Cincinnati and never been attacked like this from start to finish, win or lose. Even the Yankee fans were better behaved at Wrigley Field.

My daughter went to the Cubs vs. Sox game on Tuesday. Same old, same old. She said nothing has changed. The fans were rude and abusive.

I don’t get it? Doesn’t anybody go just to watch the games? I grew up on the South Side of Chicago. This is embarrassing!

When I first decided to write about this, I planned to leave Tina’s name off of the letter, but since she is the one who wrote it, I felt I should give her due credit.  You see, I do not fault Tina for her opinion.  I disagree with her, but I do not fault her for having that opinion.  Where I do find fault is with the editors of The Sun-Times who chose to print this letter.  What was the point?  The only possible outcome was to inflame an already poor relationship between fans on the North Side with those on the South Side.  It also perpetuates the stereotype that “all” Sox fans are just a bunch of hooligans, and that Cubs fans are nothing but the innocent bystanders of their heinous attacks.  For every story like this from a Cubs fan, there is an equally abusive and vulgar story from a Sox fan who has visited Wrigley Field as part of the Cross Town Classic.

There are good and bad fans on both sides of town, and unfortunately these games seem to bring out the worst in both of them.  When Tina described Sox fans as being drunk and obnoxious, I have to wonder if she has actually ever set foot in or near Wrigley Field.  Certainly I do not think many people would describe that crowd as sober and polite.  And I am positive that “all” of the Cubs fans will be very welcoming and considerate of the Sox fans when they make the trip up north next weekend for the second round of the yearly series.

There are actually a lot of very good and dedicated fans on both sides of Chicago, and it is a shame that the few bad apples have put such a tarnish on the fun.  With both teams having a difficult time on the field, was this really the time to pick at an old wound?  Was that really the best “Letter to the Editor” they had to fill up the space this morning?   Or were they just trying to stir up an old controversy to help with lagging newspaper sales.  Everyone knows that The Sun-Times is just jealous of the larger, better read newspaper from the other side of the river.

What can be said about the Cliffs of Moher that hasn’t already been said?  They are spectacular, magnificent, and breathtaking.  They are majestic, imposing, daunting, yet haunting.  They pull your body closer, almost like a magnet.

You may recognize them from The Princess Bride, also known as The Cliffs of Insanity.  The Man in Black (aka the Dread Pirate Roberts, aka Welsey played by Cary Elwes) climed them in search of his lady love.  Clearly this was the work of same bad digital imaging, but you get the idea. 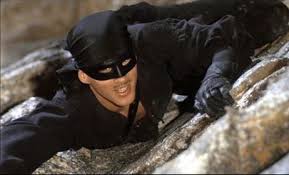 (This is the part of the blog where I confess that I hijaked Tom’s post, because clearly, only a chick would know certain things.  We all got tired of waiting for him to continue, so don’t be surprised if I finish the honeymoon stories).

According to the Irish Visitors Bureau, the Cliffs are usually at the top of the list of most visited and photographed places in Ireland, with more than 1 million people having visited there in 2006.  I didn’t make it there in 2006, I was busy wooing a certain gray guy.

Having been there in years past, it was interesting for me to see what had changed since the last time, because in visiting places I had seen before, I can almost track the progress of places visited before and the Cliffs are no exception.  Long gone are the John Wayne days of the horse and buggy and the stone cottages.  Ireland modernizes daily.  I had regaled Tom with stories of the Cliffs, of clambering out to the edge, and hanging my head over the cliff, camera in hand with whomever was my travel companion.  I’d told many people about a girl from Italy, in a gorgeous priceless pink suede coat, after seeing me with my head over the edge, had me help her lay right down in the mud, coat and all, and inch her way to the edge, camera in hand.  Sure there was a fence, but it was an old stone tablet, that looked like a prop from The Ten Commandments – easily scaled and it served more as a step stool rather than a deterrent.

Apparently I wasn’t the only one who attempted and succeeded.  I hung my head from this very cliff.

Unlike the Rope Bridge, where I swore my head off, this was something I was confident I could do, I’d done it five times before, even helping others to accomplish the same feat.  When Tom and I spent lazy evenings on the deck, planning our trip over a few (too many) beers, we decided we were doing the Rope Bridge, AND getting a shot of us hanging from the Cliffs.  It would be my favorite memory.

The morning of, Tom and I arrived – me still being a little sick of the car and the treacherous roads.  The Visitor’s Center that had just been started during my last trip had been completed, and things were a little switched around – the parking lot was moved across the street, there were these giant steep stone steps up and down the length.  Much like rest of Ireland, the Cliffs had modernized.  The edges had been rendered completely unreachable by actual fences.  You could almost hear the beer bottle of our plans break on the new concrete.  Dear Bord Falite, You Suck!

Doing what we do, we managed to roam the length, looking out by O’Brien’s Tower,

sharing bits and pieces of trivia.  The Cliffs were not busy that day, there were maybe 20 or so people.  We decided to walk to the opposite end, where the trail began, behind a fence that we were not supposed to cross where others were already walking.  The trail was closed, yet along the path, they had placed viewfinders, I guess thinking, if people are going to break the rules anyway, we might as well make a few euro out of the deal.  We arrived at the end of the trail with a few girls from Italy and saw one of Tom’s favorite signs.

As you can tell from the photo, no one pays any attention.  Because here’s our version: